Head Voice - Chest voice, Belting, Mixed voice. All these voices we Singers can use! 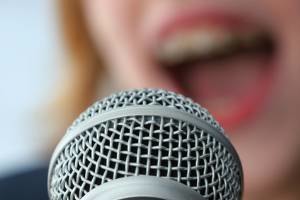 Head voice is a type of sound that many "untrained" singers like to avoid because, on the one hand, it can sound quite weak in comparison to chest voice. On the other hand, a stronger head-voice connection with a lot of depth in the throat (a lowered larynx) can, at times, sound too "classical" when it is used in non-classical music.

There is also a head-voice sound that has a strong chesty mix: that is, we hear strength from the chest voice ringing in the head voice. We hear this kind of sound in musical theatre and sometimes in pop music.

Are you confused, yet?

The human voice can make so many different kinds of sounds! Describing them is almost as challenging as understanding them.

In any event, well-produced head-voice is very valuable to every singer - regardless of style. It gives a singer both range and variety of color. 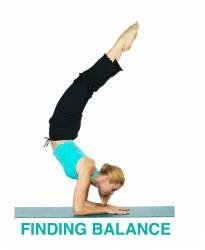 Chest voice on the other hand, is closer to the spoken voice. And when you remain in that spoken voice position as you move up the sung range, (this kind of singing is called, belting), the sound becomes bigger, brassier and sometimes more nasel in character than you will ever get with the head voice position.

But this is a big subject. I won't be able to cover it in detail in this blog or even in two or three blogs. But I can give you a simple overview of these different voice textures, supply you with links to some really interesting voices in action, and offer some ideas (and guesses) about how these singers are using their voices.

It is a fascinating subject for we singers. How we blend our voices - using the variety of chest and head-voice textures - different "mixes" of the two - is an important part of what gives each of us our distinctive vocal sound. Finding the right balance of chest and head in any given series of notes, is crucial to good singing and to vocal health.

I like the sound of belting. Just as those singers who sing mostly in head voice each sound unique, so are there many different sounds in belting.

I also like the many and varying weights of head-voice - from light and breathy to dark and beefy. Here below are links to two videos of 3 different vocal textures coming from several good singers.

On Your Own - You can also listen to the singers who are performing YOUR kind of music and think about how they are producing their voices. Are they creating sounds without strain? Do they sound as though they are having trouble? Do they often have vocal problems?

However you sing, you want to use your voice in a way that will give you many years of expressive singing... 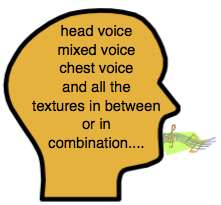 1. The Prayer - Light belting from the pop singer, Celine Dion, with lots of nasal resonance (too much?), and a phrase here and there in a head voice sound.

Listen to the word "way" at 1:22 where she uses a soft, light head-voice. A good change from the quite nasal tone she used for "our prayer" at 1:14.

The male singer, Andrea Bocelli also uses a lighter head voice sound than he uses for his more operatic types of songs. He uses less mouth resonance and perhaps a slightly higher larynx, so the sound is more spoken and less richly "sung." You don't hear the back of his throat ringing most of the time in this song.

At 3:11, both singers are singing at their fullest: Dion with a bigger belted sound, Bocelli with a deeper larynx and a more classical tone.

The final long held note has them both in head voice (4:38...). Bocelli uses a light, but connected tone on "AH." Dion begins on an "AH," but then goes into a real "OO" (as in "soup") head-voice sound - easier to sustain than an "AH" in that range. Good for her! Not easy when you have belted much of the song...

Great singers, both of them. See what you think as you listen for the variety of vocal textures they use! 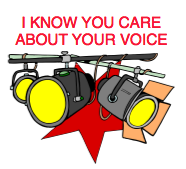 2. Defying Gravity - Idina Menzel sings with a great focus in the front of her face. I suspect her larynx is higher than in classical singing. She keeps the vowels bright and ringy. Listen to her sing the final notes of the song at 3:42.

She has tremendous strength in her belted sound that she is able to sustain right to the end of the song (with just a little wavering in the sound now and then & a bit flat here and there.) But still a remarkable performance. It is not easy to do that night after night unless you know your voice well and understand how to belt without straining your throat.

Back from Head Voice to Singing Tips with Barbara Lewis

New! How to Sing Vol.1
Insider Audition Tips, & much more.


• STAGE FRIGHT-12 Powerful Tools To Help You Beat It! - Now for Kindle

• SINGING AFTER FORTY? HOW TO GET.STARTED ON YOUR DREAM!
Guide & Warm Up (MP3) - Now for Kindle