Podcast on the Alexander Technique For Musicians - Of Special Interest To Singers! 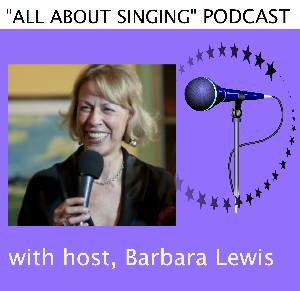 Listen to Carolyn speak about the Alexander Technique in "All About Singing" PODCAST #3 and why it is important to singers as they move into a performance career.

Read more about Caroline Holden and this PODCAST and follow along with the audio show as you read the text below.

Barbara Lewis: This podcast comes to you from Singing-tips-with-barbara-lewis.com.

I'm going to speak today with Caroline Holden, a singer, singing teacher, and a certified teacher of the Alexander Technique.

Caroline, who lives in Montreal, Canada, has sung frequently with orchestras in Montreal and in Europe. She talked with me today about her evolution as a singer and her fast-paced launch into the world of singing at a young age. Caroline also speaks very honestly about some of the difficulties she has faced in her singing life. We also talk about what led her to study the Alexander Technique, how it has improved her singing, and how it helps the singers she teaches.

Let's start with singing. What led you to singing? 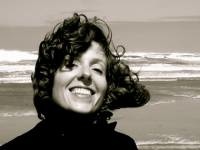 Caroline Holden: Well, oddly enough, I started in a band. I had a boyfriend…this is when I was 17, and he wanted to start a band. And he started a band and having the competitive nature that I do I thought, "Well, really, I want to start a band too. And in fact, I'm going to start an all-girl band.

So I started an all-girl band which didn't work out, but then, I loved being in the band so much that I then put an ad in The Gazette saying, Looking for a drummer and a guitar player, 'cause the bassist from the previous band had stayed with me. And we were lucky. We found these two great musicians and we had a band, a band that played around Montreal.

So, doing three sets a night, 45-minute sets each time in a smoky nightclub and, you know, screaming at the top of my lungs I thought, "I had better take singing lessons, because I'll never last." So I found a singing teacher through the McGill Conservatory and I started working with her and I discovered that I really loved it.

Barbara Lewis: You loved the lessons, or you loved classical music? What did you love?

Caroline Holden: Everything. I just sort of fell in love. I mean I really fell head-over-heels in love because I mean I began…I would go to her and she'd warm me up. But then my voice started to change. And then she was giving me more, - a slightly harder repertoire, you know. We were going into Mozart stuff instead of just sticking to Schubert, well not that Schubert is any less difficult, but you know what I mean but…

Barbara Lewis: You were singing Mozart in your lessons but you were shouting rock music (laughter).

Caroline Holden: Yes. That's exactly right. It wasn't rock it was Ska, which was like, you know, like an offshoot of reggae.

Caroline Holden: At any rate…and then she would put me in little Kiwanis Club competitions. And then I went to see the movie Amadeus. Do you remember that?

Barbara Lewis: Sure. Of course, a great movie.

Caroline Holden: That was the turning point for me. I just was completely…I was gobsmacked, I was just (takes several deep breaths)…

Caroline Holden: Yes. And I hate singing Mozart. Because you're so…

Barbara Lewis: Now? Now you hate or back then?

Caroline Holden: I always have, actually, you know. How do you maintain the voice, the full…you know, you want it to be simple. You don't want it to be overdone, but you want to be able to use the entire voice, but in a very hmmmm…

Barbara Lewis: So the next few years of your life…what were they like?

Caroline Holden: Well, they were amazing. It was…I was like living in a dream because, leading up to the point that I went into McGill I was in my band and I had to do all the Conservatory stuff, because I hadn't studied music at C.E.G.E.P.

Although my family was musical and I played the piano and whatnot. But I had to get all the theory and the ear training. And even leading up to that I remember I was going to McGill Conservatory and wishing I was there. Wishing desperately that I were there, you know. I was eighteen, nineteen. And then I got in. So when I finally got into McGill, into the program, I just…I was soaking everything up. I mean a lot of the people around me were coming from Vanier or directly from High School in Ontario and they'd all been singing and doing this for many, many years, so I felt kind of shy.

I felt almost like "I'm not as learned in that area." And I always felt a little bit less than? But I was soaking everything up. I was just…ah, it was so fun for me and…I lived there. I just stayed day and night at McGill, day and night.

Caroline Holden: I never wanted to go home, you know?

Barbara Lewis: Did you move on to graduate and go in to a period of auditions?

And so I got like then, a very big role actually. I had my own aria, I sang a duet with Belinda. I was second woman and I was…my mother just about collapsed when she saw…because when I got out on stage…I thought I was going to be with the choir.

You know, I thought, "Okay." And it was with Charles Dutoit and the rehearsals and a humongous choir behind and I thought okay, well you know I'll be invisible, I'll be in the choir, it'll all be fine. And then he said, kind of grudgingly, "Well you know, Caroline, you're going to have to go on the stage with the soloists," and I went…Ooooooh.

Caroline Holden: And then he said, "But you're keeping on your choir outfit!"

Barbara Lewis: (Laughter) Not to let you get too big a head, eh? You made a leap into the world of professional singing, then.