Feldenkrais Practitioner, Alan Fraser interiewed on the "ALL ABOUT SINGING" Podcast 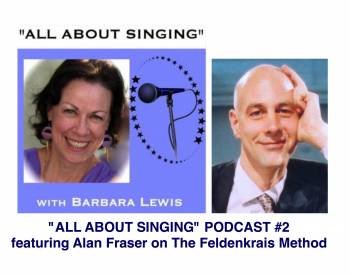 For the "ALL ABOUT SINGING" PODCAST #2 -

I spoke with Alan Fraser, long-time Feldenkrais practitioner, about ways to sing better.

And here is the link to the PODCAST MP3. PART FOUR (The final part)

Feldenkrais Practitioner, Alan Fraser: And I think there's something that happens in terms of emotional expression that really stymies this need that we have to express ourselves and that's when emotionality or intensity of emotion is associated with tension in the body. And it's a really strange mental flip flop you have to do to let go of the… I've had friends who I gave Feldenkrais lessons to and they've said, “Oh my God, but I'm playing with no emotion because I don't feel it.”

Barbara Lewis: (laughs) Because they let go of the tension, is that it?

Alan Fraser: Yes. And their playing was amazing. It was way more passionate, fiery, colorful, free and everything.

Barbara Lewis: But they couldn't feel that.

Alan Fraser: Because they didn't have the visceral tension in their bodies and their heads that they were used to. So it's difficult because you have to go through this period of sensitivity and experimentation and letting go of your habits. So you're really at sea for a while. And I find in my work with singers it's the same. Because the wonderful thing that happened to me is that not only do I use Feldenkrais to apply to develop piano technique and develop a whole new approach to piano technique but I also became a Feldenkrais practitioner in my own right simply working with cerebral palsy children and athletes and singers and other instrumentalists. And so in singing the use of the body has largely to do with breathing.

Barbara Lewis: Tell us. Tell us something about breathing. This is something that singers are always concerned with.

(…At this point in our conversation, Feldenkrais Practitioner, Alan gave me a physical demonstration of what he meant by good posture for singers. I've created a video for you to look at. It's on Youtube and the link is HERE.)

And now back to the conversation…

Feldenkrais Practitioner, Alan Fraser: Yeah. Well, there's this image we have of what good posture is which resembles a ballet dancer like Najinski – very, very open. I’m being almost haughty in my demeanor and proud and upright, but actually there's a lot of tension in my lower back holding me that open. And so in a Feldenkrais lesson you might through tiny, tiny little movements up through the spine, little extensions, inflections you might be able to actually come to a sense of self - standing where it's not forced open. Not of course depressed but somewhere in the middle where the actual bones of the spine, the vertebrae are doing the work of stacking themselves up on one another to a natural openness.

And that…and when I bring a singer to that…sometimes I can do it not even in a lying down Feldenkrais lesson but just a few minutes of work, you know, guiding their hips this way and that - seeing where the ribs are. All of a sudden they're standing and they feel a little bit more like a monkey. However, when that tension releases in the lower back then the breathing deepens and the tone of the voice just opens and deepens and widens and gets more color.

Barbara Lewis: You've seen this kind of transformation in the singer.

Alan Fraser: Absolutely. I can do it…sometimes I can do it in five minutes.

Barbara Lewis: And is there scientific underpinnings for that? I mean can you say physiologically what's happened when you make that small change?

THE DIAPHRAGM DOES WHAT?

Feldenkrais Practitioner, Alan Fraser: Absolutely. You see the concept of support is often understood as some sort of pressing down on the diaphragm, but actually what this does is simply free the diaphragm. You see when the spine is too far forward in the lower back then the diaphragm actually has to participate in holding the skeleton in place. And it's not free to simply manage breathing. It has this other job to do. And so when I bring the lumbar vertebrae a little bit back so that they're not thrust forward but more just stacked over the pelvis, then all of a sudden the diaphragm goes (deep breathing sound) (laughs).

Barbara Lewis: It's that dramatic?

Feldenkrais Practitioner, Alan Fraser: Yeah. And you know, a Feldenkrais private lesson where you're lying on the table then I might move the client this way or that way and evoke this lowering of effort through the lower back and then there's a spontaneous deep breath from the client. And sometimes their breathing is shallow and then all of a sudden (makes sound of deep inhalation of breath) you'll see this, and that denotes that there's been a complete change in the neurology, in the neuromotor organization and the relation to breathing and movement.

Barbara Lewis: How does a singer who's gone through that with you maintain that?

Feldenkrais Practitioner, Alan Fraser: Good question. Well, it's kind of like saying, you know, if you want to become a brain surgeon do you go to school for a week? Or many years, right? So…

Barbara Lewis: You've been at this for many years, haven't you?

Alan Fraser: Yeah. But sometimes some abilities are learned like that, right? Look, when you learn to ride a bicycle, 20 years later you can still do it.

Alan Fraser: So you never, you never know with a Feldenkrais lesson how much of the learning will simply be acquired and stick and how much of it will need repetition and expansion and exploration of different variables.

Barbara Lewis: So it's really an endless thing. It's like the practice of meditation…you begin doing it and you do it for the rest of your life. This is what you've been doing. Twenty years?

Barbara Lewis: And are you still unfolding into understanding your own body? At this point?

Alan Fraser: Absolutely. It just keeps getting richer and richer. You know. It's the same with the Applications of the Piano Technique. I finished the first book in 2003, and the DVD in 2006 and then a second complete book. And people were asking me, "What? You already said everything in the first book?" No, I didn't.

Barbara Lewis: Your first book was The Craft of Piano Playing, correct?

Barbara Lewis: And what's the second one?

Alan Fraser: The second one has a more Feldenkrais title. It's Honing the Pianistic Self-Image. Skeletal-Based Piano Technique. And now…

Barbara Lewis: This is what you're doing now…

Feldenkrais Practitioner, Alan Fraser: I've got a third book on the way.

Barbara Lewis: There's a third book? Do you know the title?

Alan Fraser: My old teacher in Montreal, Phil Cohen, he always wanted to write a book called, The Mindful Hand. But it never happened. If I get permission from him it'll be called The Mindful Hand.

Alan Fraser: Or I'll think up a similar title.

Barbara Lewis: Thanks Alan. Thanks very much. I'll be in touch.

"ALL ABOUT SINGING" PODCAST #2 - THANK YOU FOR LISTENING!

Barbara Lewis: You've been listening to the All About Singing podcast. I'm your host Barbara Lewis from Singing-Tips-With-Barbara-Lewis.com.

To learn more about Feldenkrais Practitioner, Alan Fraser and his book and DVD called The Craft of Piano Playing, visit his site, alanfraser.net.

And please visit my site, singing-tips-with-barbara-lewis.com to join my newsletter for weekly tips about singing, songwriting, and for stories about the world of singing.

Until next time, I wish you Great Singing!

Back from Feldenkrais Practitioner to Singing Tips With Barbara Lewis